When A Car Is The Oldest Member Of Family

There are new cars, used cars and then there are vintages – the elegantly built works of art on wheels that can turn more heads than contemporary cars on any given day. With a sturdy engine and a gracefully designed body that flows like water, these cars breathe style and luxury like no other.

On 31st January we attended the Vintage Car Rally at Fort and oh boy, what a sight it was! On the Sunday morning, Horniman circle was adorned with pretty Cadillacs and imposing Mustangs. There was a maroon 1940 Austin 125 A parked near the fountain and a shiny, yellow 1926 Studebaker Erskine pulled over across the road. We were hopping from one car to another, barely taking our eyes off them when we bumped into a young man standing in front of his jet black 1937 Chevrolet. 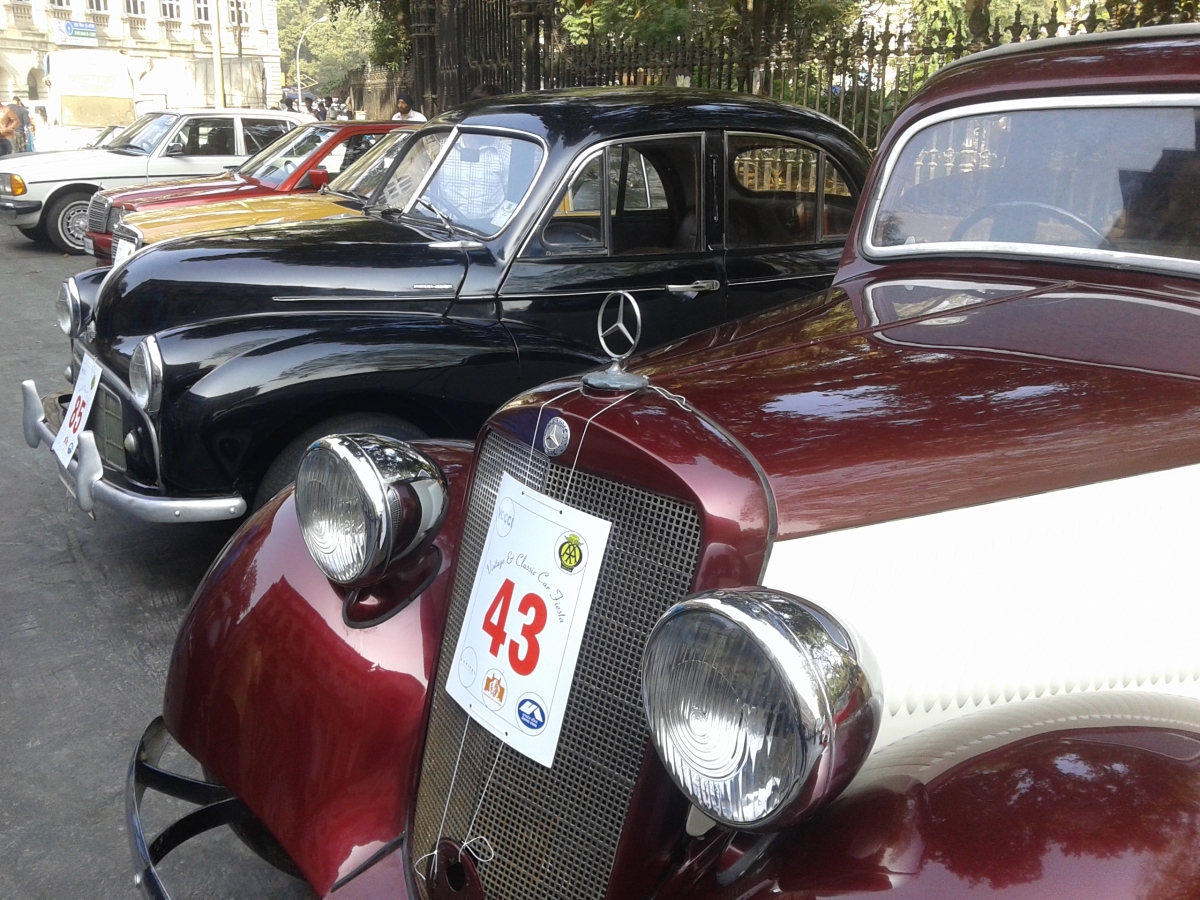 We introduced ourselves. Adarsh Jain, the young man, told us that he was participating in the rally for the fourth time and was accompanied by his father. When asked about the royal black Chevy beaming beside him, he said
“Our car is the oldest member of our family. It was bought by my great grandfather Mr. Keshrimalji Dhanrupji in 1938 when he was only 25 years old. Today I am 25.”
He stops midway and lets out a laugh.
“I guess it’s time that I buy myself a car. But I am still a student.”

After the rally as we sat in Starbucks over coffee, Adarsh told us that he was pursuing MBA in finance. He added “My great grandfather was extraordinary when you think of all that he has achieved in his lifetime. He founded our family’s textile business in Mumbai. He lived in Sirohi, our home place. His work required him to travel a lot. Luckily he knew a good friend who owned a dealership of General Motors. That’s how he went about buying the Chevrolet 1937. At that time the price was around Rs. 5000. Due to import duties and other paperwork, the Chevy took one year to arrive. In 1938, ours was the first car in the city of Sirohi.”

The young man fondly narrated some of the early stories about his vintage beauty. “When the car was new in the city, people used to come from far off places and flock around it. My grandfather Shantilalji had a special soft corner for the Chevy. Ocassionally he used to wash it and drive it himself. But at the same time, he wasn’t vain about it. He used to lend the car to others in times of need or otherwise. My father tells me that at one time, around 19 people crammed in the car and drove miles to watch the first show of Mughal-e-Azam .”

He told us about an incident where a mob of muggers blocked their way while the family was returning from a wedding in the Chevy. Adarsh’s grandmother and two other ladies in the car were wearing heavy jewellery. He says “One wonderful feature of Chevrolet 1937 is the boot space which is opened from the inside by pulling up the backseat. So, before the mob closed in and forced open the car doors, jewellery was locked away safely in the boot space. The loss was substantially reduced.”

Listening to Adarsh speak so animatedly we realised how he was not only talking about his car but a complete catalogue of memories created on those four wheels over generations. When asked about the kind of compliments and reactions the Chevy stimulates, he says “The old Chevy is still very much of an eye catcher. It is kept in our property mansion in Rajasthan. We take the car out on weddings and family celebrations. Even after 77 years it is a smooth drive. People are generally in awe. They click pictures and ask about its specifications. Nevertheless you find a few who suggest selling the ‘old car’. Kids love it though. I take my nieces and nephews for ride on it.”

Before the last sip of coffee, we asked Adarsh if he was looking forward to celebrating a Centenary with his good ol’ Chevy.
“Sure, by all means I am looking forward to that day.”
He paused for a brief moment and continued “You see, this Chevy is more than a car to us. It is our family’s own time travel machine. Not to forget that I am also a bit paranoid. Given previous experiences I would go to weddings only in my Chevy .” He winked and we shared a hearty laugh before parting.

Vintage cars have always been a symbol of luxury, wealth and status. But that evening we learned that there is always more than what simply meets the eyes. 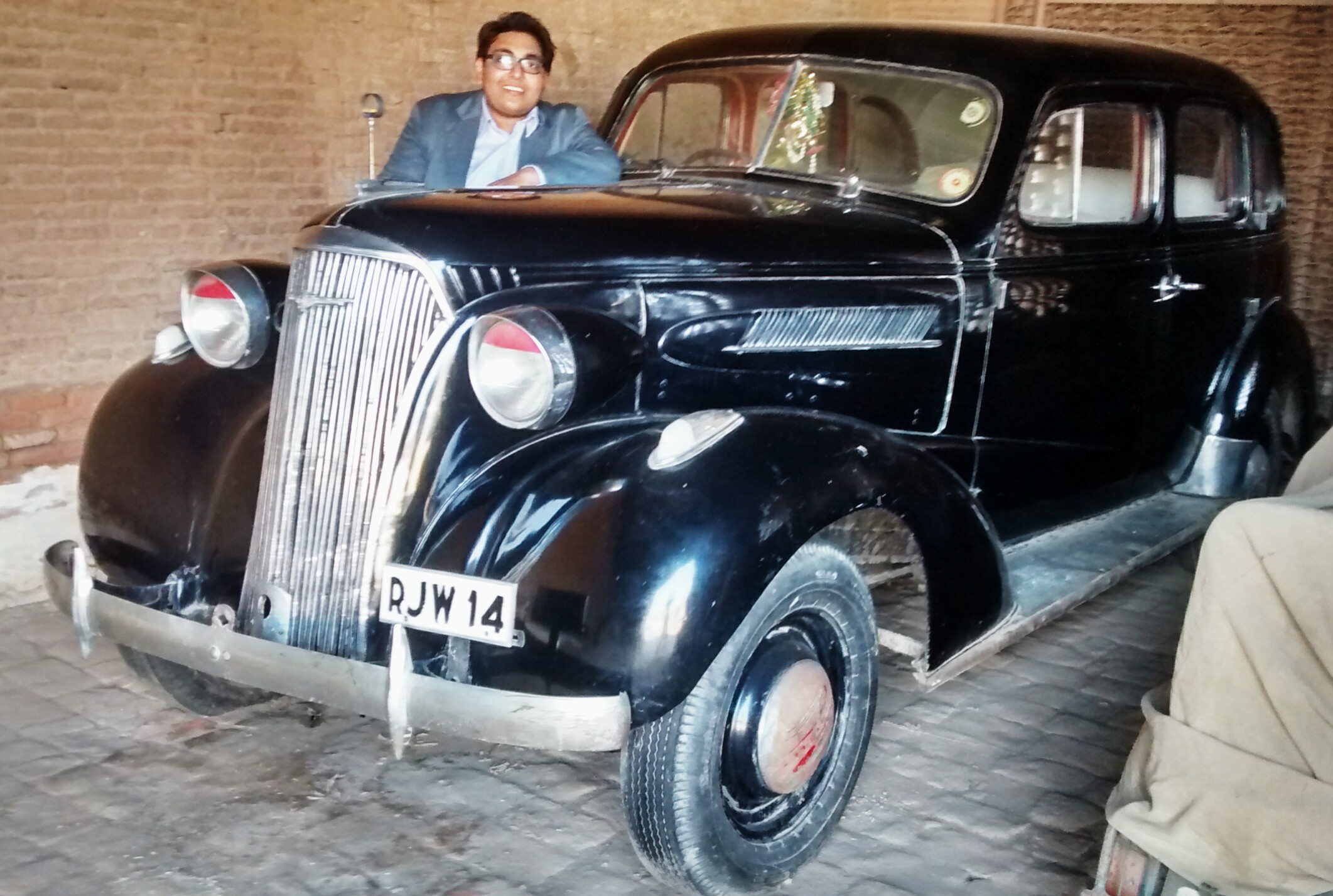 Album photo: Adarsh with his Chevrolet 1937