Less than two years after the launch of the KUV, Mahindra has given it an overhaul and launched the KUV100 NXT. With a whole range of premium features and fine-tuning of a few existing ones, the rejuvenated KUV100 is definitely much more alluring than the old one.

The contour and the shape remain intact – but the overall length has increased by 25 mm. The front grille has been given a much more rugged look. Both the front and the rear bumpers too have been spruced up. The skid plates are silver, giving the car a sleeker look. The outside mirrors now have turn-indicators fitted. The handles on the rear door are now black and so merge aesthetically with the car. The tail-lamps are now clear-lens and the KUV100 NXT has a new set of headlights. The NXT comes with a dual paint option – red or silver with black rooftop. There are 6 single-colour options. All the cosmetic changes give the hatchback a sporty SUV-like look. 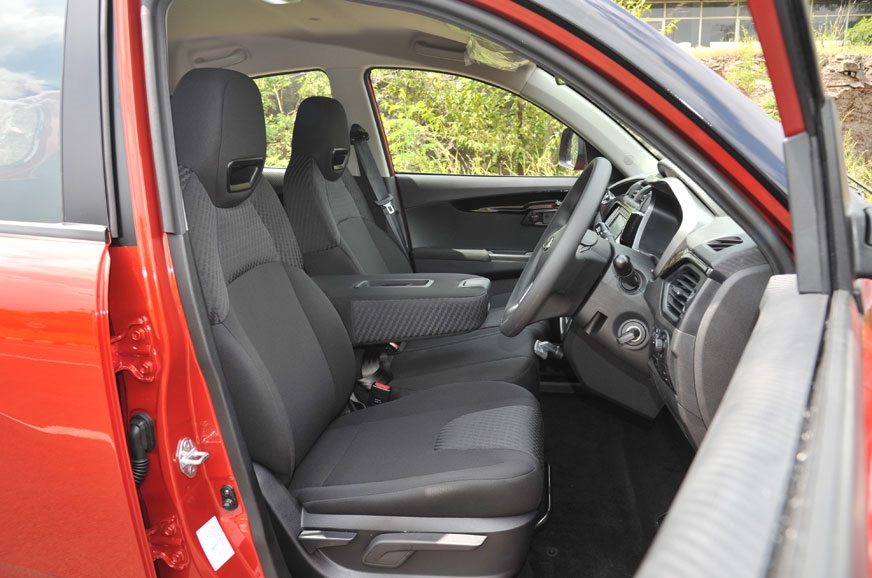 There are not too many changes inside, however the red coloured details inside have been taken off. The manual A/C buttons are new. The new 7” touchscreen panel is compatible with Mahindra BlueSense and is one of the biggest pluses. Though the screen is also meant for park assist, the absence of a reversing camera renders it meaningless.

The one particular feature that stands out in the car is the six seater configuration. Though it may not be the most pragmatic thing possible, unless the middle passenger in the front row is a child, Mahindra hopes to draw in customers who are on the lookout for a budget family car. In India, this could work in its favour too, with many families still having three generations staying together.  There is enough storage space inside the car. The rear seats and the boot remain largely the same.

As before, the KUV100 NXT comes in petrol and diesel variants, both in a manual 5-speed transmission. The car cruises easily and there is not much of a need to continuously downshift in traffic. The 1.2 litre petrol engine has a horsepower of 83 whereas the 1.2 litre diesel engine has a horsepower of 78. The five-speed gearbox is accurate and smooth. It is a thrill to operate. Mahindra has apparently improved the insulation and reduction in vibration but the A/C blower still appears louder than normal. The petrol variant gives a mileage of around 17.45KmpL whereas the diesel one gives a mileage of about 23.04 KmpL.

With stiff competition from the likes of Ford Figo, Hyundai Grand i10, Maruti Swift, Nissan Micra etc, Mahindra KUV100 NXT has a tough fight on its hand. But it is clearly hoping to attract those who want an SUV but cannot afford one, so let’s wait and watch how the Mahindra fans and SUV fans respond to this hatchback-that-dreams-to-be-an-SUV.

Wait for these new MPVs coming to India in 2018 Coming Up: Best Season to Buy Cars!