When the organizers of the show started the Consumer Electronics Show or CES in New York city in 1967 as a spinoff from the Chicago Music Show, no one would have imagined (not even the Motorola chairman Bob Galvin who kicked off the event) that it would become like the Mecca for people interested in gadgets and tech.

After having experimented with a number of variations and venues, the CES has been drawing huge crowds to the city of Las Vegas every year since 1998 and with over 4.4 thousand companies exhibiting, and over 182 thousand attendees, CES 2019 did not disappoint either.

While the CES features the latest in gadgets and tech from across the world, automobiles and transportation have always taken the centre stage with the show. Right from crazy concepts to seemingly out-of-this-world automobile technology, CES 2019 created news for all the right reasons. Here’s a list of some of the automobiles and tech that literally turned heads at the show.

When the Japanese automobile manufacturer Nissan introduced the electric vehicle Leaf back in 2010, it was a game changer for the company. However, close to a decade has passed since then, and the Leaf, to be quite honest, seemed to be getting a bit out-dated among the increasing influx of EVs in the market. Enter the Nissan Leaf E+, a new variant of the Leaf that can cover 226 miles (or about 363 km) in a single charge, 75 miles more than its predecessor. Not only that, the 2019 Leaf E+ also has a more powerful motor, churning out 150 kW (or about 200 hp) of power.

A cursory look at the 2-litre four turbo charged cylindered CLA 250 from Mercedes Benz will give you the impression of the usual supercar seen at Motor Shows, but this beauty is so much more than that. The first semi-autonomous production car from Mercedes Benz, the CLA 250 can drive by itself on highways, and surprisingly even overtake, as you lean back in comfort behind the wheel. 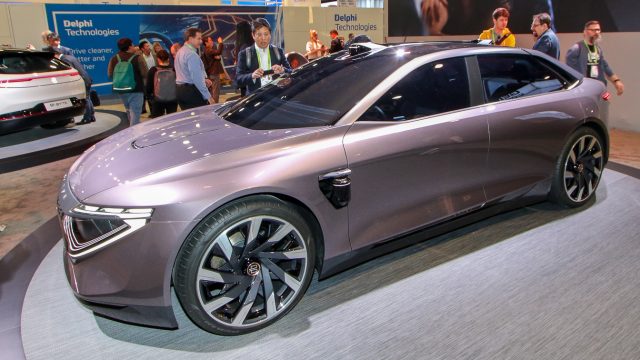 An electric SUV from Byton, a Chinese automaker that is only just starting to shift gears in the industry, the M-Byte has more screens in its cabin than a small multiplex. While the prototype had earlier been revealed, Byton made full use its exhibition space at CES to unveil the astonishingly instinctive interiors of the M-Byte. This electric crossover has three sizeable screens on the inside with multiple functionalities, including a large 48’ long touchscreen display that stretches pillar to pillar across the entire dashboard area.

Apart from some of the most awaited launches of the year, CES 2019 also gave automobile manufacturers a chance to showcase their work on mobility concepts of the future. Here’s a look at what transportation will possibly look like by the year 2030.

Mercedes Benz seems to be expanding its horizons from private and luxury cars to public transportation and the Vision Urbanetic concept is just another step in that direction. With an exterior that quite resembles that of an alien pod, this autonomous automobile can very efficiently switch between a passenger vehicle and a cargo carrier. Self-driving fleets seem to be the future of public transportation and the Vision Urbanetic is part of Mercedes Benz’s effort to ensure that it is more than ready when the future arrives.

A glance at the Elevate concept from the Korean automaker Hyundai parked someplace would fool you into believing that it is just another on-road car. However, stuck in difficult terrain, the Elevate shows its true capabilities, with the wheels unfolding into spindly legs that can literally lift the vehicle out of any situation. Quite the Transformer, indeed!

What are the RTO rules for selling a scrap car? Amazon Alexa coming to your car soon