Skoda Kodiaq: All set to dominate the Indian roads

A recent study of the Indian automobile market shows a distinct shift towards SUVs, with the domestic consumer decidedly preferring size-for-price vehicles. Thus, it is natural for car manufacturers to unleash more SUVs into the market, with the latest one in line being Kodiaq from the Czech manufacturer Skoda Auto. Expected to be launched in early October this year in the Indian market, Skoda Kodiaq will make use of Volkswagen’s MQB platform, and will thus be similar to the Volkswagen Tiguan, scheduled for a May release.

Skoda Kodiaq inherits the mustache grill and rectangular headlamp from its predecessors. The aggression of the vehicle is clearly visible in the three part air dam, rectangular projector headlamp and LED DRL, squared wheel arc, new alloy wheel, and sloping roof. The sleek bonnet and futuristic fender add grandeur to its presence on the road. The wide doors with sharp shoulder line contour, extended throughout the 4.7 meters length, give a sporty look to the profile of the full sized SUV. Integrated LED tail lamp, massive tailgate opening and twin exhausts underline the masculine appearance of the vehicle. The spoiler and the roof rails are also well integrated into the SUV and work well to enhance its looks.

Kodiaq is equipped with seven seats in three rows. There are two seats in the first row; three seats in the second, with slide and split option; and two again in the third row, capable of accommodating adults. The upholstery and interiors bespeak a superior finish. Dual zone climate control with separate blowers for rear seat are present in the vehicle. The infotainment system is also of the latest generation having touch sensitive controls. 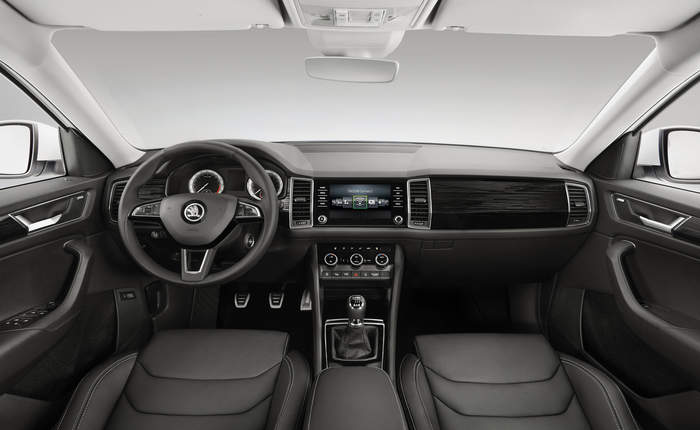 Being a full sized SUV the price range may fall within 25-30 Lakhs INR, and the Skoda Kodiaq will compete with SUVs like Toyota Fortuner, Ford Endeavour, Nissan X-Trai, Honda CR-v, Mitsubishi Pajero for a place on the roads.  As a premium segment offering the Kodiaq is all set to get a good chunk of the SUV market.

Simplifying the complexities of car warranties Getting a Driver’s License in India – As easy as it sounds?