The Nissan Xmotion (read as Crossmotion) is a true crossover in every sense, bringing together futurism and folklore, sports utility and passenger comfort.

In a cross-pacific collaboration between the east and the west, it combines North American utility with Japanese technological expertise and craftsmanship. Revealed at the North American International Auto Show in Detroit, the Nissan Xmotion managed to turn quite a few heads and even grabbed the ‘Innovative Use of Color, Graphics or Materials’ award at the event (the second time in a row for Nissan after their Vmotion 2.0 concept vehicle won it last year).

On the exterior, the Xmotion makes quite a bold statement, mixing up curves and cuts in the right proportions. Smooth at the rear and on the sides, with the seam between the doors marking the only split, it is the front of the car that truly distinguishes the beastly side of the Nissan Xmotion, with its high stance and muscled proportions. Although the U-shaped headlights manage to soften up the feel a bit, the enormous V-motion grille and the chunky front bumper and under-body guards give the Xmotion the look of a mechanical autobot ready to go to war.

As polarizing as the view might be from the outside, the interiors are extremely soothing. Basing the interior design on the landscape around Mt. Fuji and in the form of a river flowing down the middle, Nissan has managed to seamlessly blend the unscathed, flawless beauty of nature with advanced futuristic Japanese technology. Featuring ‘The New Nissan Intelligent Mobility (NIM)’ technology, the Xmotion has seven digital screens in all, with five of them spanning across the entire length of the instrument panel and a digital room mirror in place of the rearview mirror for viewing the occurrences behind. 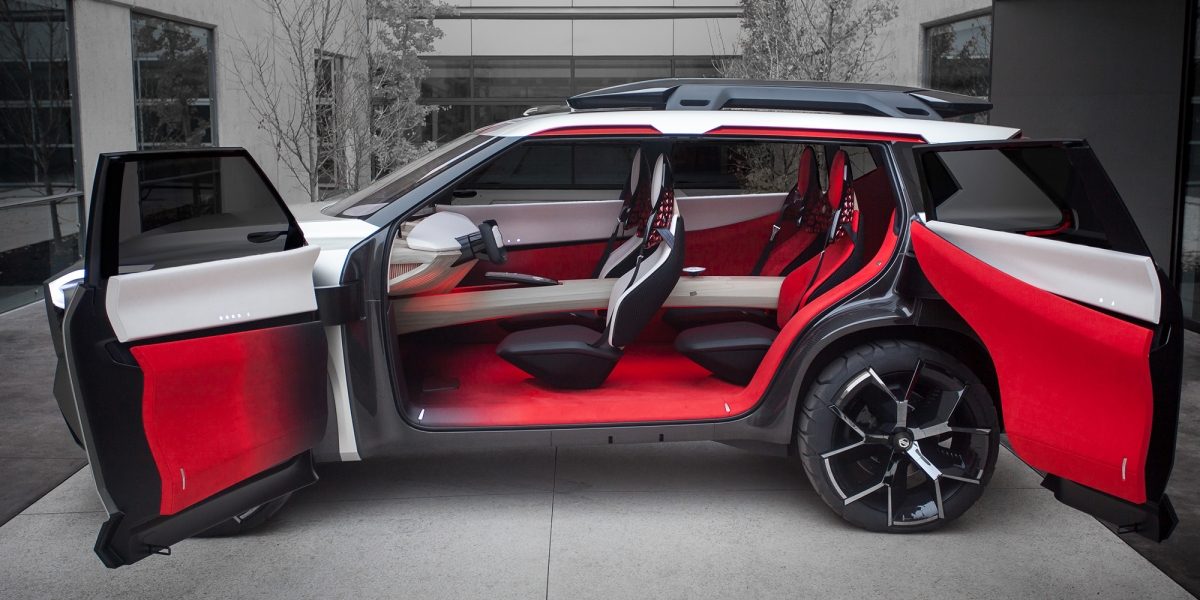 However, the most interesting bit in the Xmotion arguably is the virtual assistant in the shape of a Koi fish (a symbol of love and friendship in Japan) that swims through the virtual river between the console screens and the continuous front-to-back touchscreen on the armrest in the middle. The virtual Koi can perform a multitude of functions ranging from intelligently operating the music system and navigating on an autonomous drive mode to programming the interior cabin conditions based on user preferences.

Adding to its futuristic feel, Nissan has provided for an aircraft yoke in the place of a steering wheel in the Xmotion and has fingerprint authentication on top of the console for getting the car as well as the virtual assistant operational. The functions on the display screens and the infotainment system can be controlled through hand signals and eye movements, as well as by using the voice command system, allowing the driver to focus more on the driving part. There is ample space on the inside with the Xmotion following a 4+2 (the 2 seats in the third row only being comfortable enough for children) pattern and having rotating bucket seats, for the self-driving mode.

Taro Ueda, Vice President of Nissan Design, and his team decided to unveil the Emotion concept at Detroit, instead of at the Consumer Electronics Show in Las Vegas, where such concepts are generally revealed, signalling a desire to really bring the Xmotion into production. However, with intuitive controls rivalling the Batmobile and with wood panelling on the dashboard made using the Kanawa Tsugi joinery techniques, getting the Xmotion into mass production will be a mammoth task for Taro Ueda and the rest of the Nissan team.