Claiming to be the first Compact Utility Vehicle or CUV in India, the Ford Freestyle is the latest offering from Ford.

The Ford Freestyle however, is considered a face-lifted version of the Figo that is being launched as a cross-hatchback, a hybrid of sorts still hoping to exude the rugged flavour of an SUV. So does the new Freestyle have anything new to offer? Let’s find out.

Starting with the vehicle’s external appearance, the first thing that strikes you is the raised ride height, with the wheel alloys up one size to 15 inches and wider tires. Sporting the same headlamps as the Figo but with a smoother finish, a bolder 3D mesh and sharper-cut grille, functional roof rails that can support 50kgs weight, and scuff plates at the front and rear-end the Freestyle does have its own personality. However, the sides of the car get body graphic stickering at the bottom part of the door instead of any protective body cladding. Other features include a prominent bumper with angular C-shaped fog lamp enclosures, vents at the rear end of the bumper and rear profile tail lamps styling. The boot capacity at 257 litres is quite substantial. 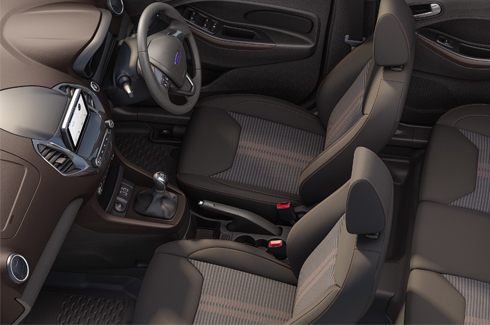 In-Cabin, the star attraction is the 6.5-inch touchscreen featured in all variants of the Freestyle, save for the base-spec Ambiente. Interestingly, it’s only the top-spec Titanium+ variant that features Android Auto, Apple CarPlay and Ford’s SYNC 3 infotainment system.

The interiors are pretty similar to the Figo, again the brown-black dual-tone theme is offered only in the Titanium+ variant. The plastic quality of the fixtures seem upgraded and the fabric upholstery is colour-co-ordinated.  Although supposed to be a 5-seater, cabin space does feel a bit cramped. There is great storage space in the central console, illuminated USB ports and a start stop engine button for ignition, other additions include an updated MID, auto-dimming rear view mirror, automatic headlamps and rain-sensing wipers. Regarding safety features, dual air bags and anti-lock brakes are standard across variants, with add-ons in the top-end variant. 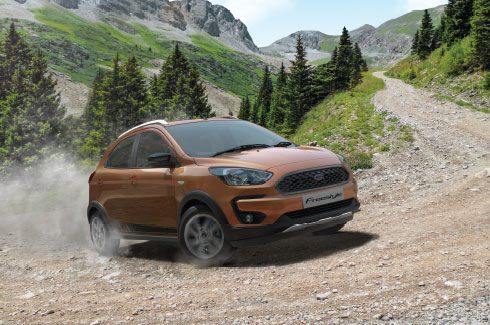 Performance-wise, this CUV debuts the 1.2-litre Dragon series petrol motor that churns out 94 bhp of peak power. The diesel variant is powered with the tried and tested 1.5-litre 4-cylinder diesel engine which makes 100 bhp of max power. The new Getrag-sourced 5-speed manual gearbox is responsive, steering is communicative, and the engine is quick to rev up, all making for a pleasurable driving experience. On city roads, thanks to the broader wheels and higher suspension, this vehicle handles bad roads and potholes with ease.

In terms of Off-road capabilities, the Active Rollover Prevention combined with the Electronic Stability Control is an interesting introduction which allows the Freestyler to perform well on extreme terrains.

Ford promises a fuel efficiency of 19kmpl on the petrol variant and 24.4kmpl on the diesel. Available in Petrol and Diesel variants, what’s missing is an automatic variant. The Ex-showroom India price is between 6-8 lakhs.

It will be interesting to see how Ford Freestyle performs in the cross-over segment with bookings open now.