Fond Memories of the Amby

For a child of the sixties growing up in West Bengal, the Ambassador, “King of the Indian Roads” was a part of the landscape and aspiration – the ultimate symbol of success.

My earliest memory of Amby is standing by the roadside with wide-eyed wonder and waving at a cavalcade of those white behemoths, some with glowing red beacons. For a seven year old, a large white Ambassador meant the passengers were very important people. And I vowed then and there to one day get my own Amby. 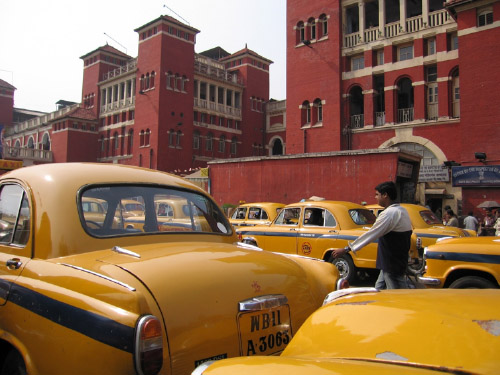 Growing up, there were many occasions to travel in the Amby. The yellow taxis, Uncle’s brownie (his prized possessions till the very end), the hired ones for family holidays and deliverance for pilgrim phases of life. No matter how many of us, the large hearted Amby always had space – leg space, boot space, seating space….

As a child, I always felt as safe in the Amby as in my father’s arms. Sturdy and reliable, the “Patton Tank” of the civilian never let us down. Negotiating the s-bends or u-pins on the way to Lord of the Seven Hills or driving with cousins to the beach in Chennai, storing the luggage in the spacious boot, or stacking them on the roof, the regal Amby had it all.

Plush bench seats with gorgeous cream upholstery, hand stitched curtains that allowed you to peek out of the window, back rests that were as luxurious as a leather sofa – the Amby was a car of the common man dreaming big; the politician, soldier and royalty alike.

Later in life, the Amby would lead to more memorable times. Like on my first date, the protective armoured car was parked on a steep road on the secluded hills, only to start rolling down backwards at an inopportune moment. It took enormous strength from the two of us to pull up the hand brake and stop the descent to disaster.

Ever wondered why those lovely yellow beauties have a dent in the front and rear in Kolkata? Visit R.N Mukherjee Road for the answer. Either side of the road, Ambys are parked bumper to bumper in neutral gear. If one wants to get back on road, all she has to do is gently nudge the lovely lady ahead, get into reverse gear and push the madame at the back a few inches, and with a twirl of a skirted senora in a tango, off she would be on her sojourn….with a little dent for’ad and aft.

7 Simple Tips to Extend the Life of Your Tires Will Currency Ban Boost Sale of Refurbished Cars in the short run?