Cars under ₹15 lakh with the Best Infotainment Systems

Car infotainment systems have come a long way over the previous century. It began with a car radio demonstration at the Louisiana Purchase Exposition in St. Louis, Missouri, by Lee de Forest (often termed by many as the ‘Father of the Radio’) in the year 1904 introducing the device to the world.

Then there was the first operational car radio installed by Kelly’s Motors in Australia, and finally, the modern day touchscreen devices that include a host of different features such as navigation, USB and Bluetooth connectivity, Wi-Fi and even pods for wireless charging these days.

For car infotainment systems, also known as In-Car Entertainment (ICE), third party applications, such as Apple CarPlay and Android Auto which allow you a rather convenient interface to access your car’s computer, are pretty commonplace these days. The touchscreen on your dashboard converts to an interface similar to the one you have on your phone, allowing you access to a Home Screen, Calls, Messages, Navigation and even a few downloadable applications such as Spotify.

Over time, the infotainment systems and their interfaces have only gotten glossier, more convenient, more accessible and with a greater Eyes-on-the-Road-Benefit (ERB). Let us take a look at some of the most fun, user-friendly and advanced infotainment systems in cars priced under ₹15 lakh. 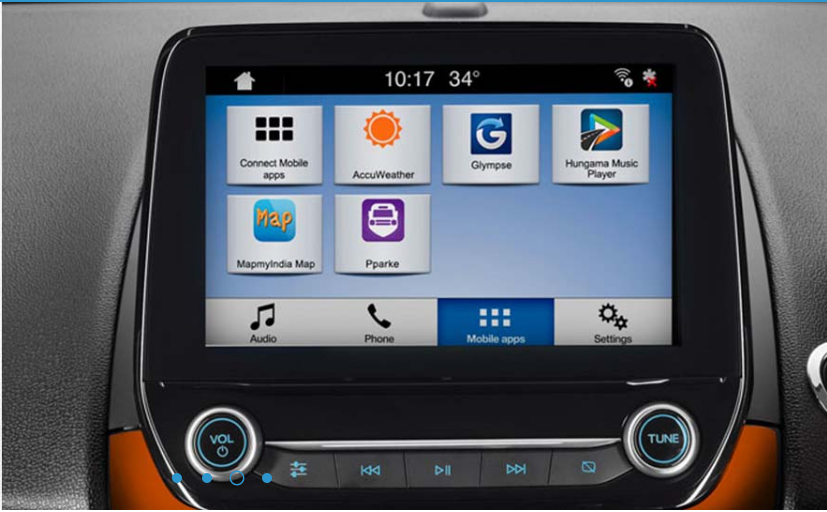 The new 2019 Ford Ecosport launched this year is next-gen, equipped with state-of-the-art tech and a lot more fun as well. Apart from fun features like a paddle shift and cruise control, the Ford Ecosport has an 8” touchscreen featuring Ford’s latest SYNC3 technology with voice recognition that allows for hands-free calling, as well SYNC Connect and SYNC AppLink that provide you with incredible connectivity between applications such as Alexa, while also letting you perform a number of different actions remotely.

The team at Hyundai seems to have gotten pretty serious about the tagline ‘You can have it all’, packing the Creta with just about any and every one of the most contemporary features available. Apart from a really cool Smart Key Band that allows you to open and start the car without a key, the Hyundai Creta has a 17.77cm Touchscreen AVN System with an IPS (in-plane switching) display that reduces viewing angle dependence considerably and has a host of different features and functions such as Apple CarPlay, Android Auto, the iblue Smartphone Remote Control app (that connects you to your Infotainment system via Bluetooth) and ARKAMYS’ sound mood.

The new ‘bolder’ Maruti Suzuki Baleno is equipped with the Smartplay Studio system that makes it possible for you to text, call, play music and do a number of other things on the go. The infotainment system in the Baleno includes features such as a Navigation System that provides you with live traffic updates while driving, voice commands, Apple CarPlay, Android Auto and can be remote controlled using the Smartplay Studio App.

The Hexa by Tata could very well be one of the most technologically advanced cars in its league. Sporting a 7″(17.78cm) capacitive touchscreen designed by Harman (a subsidiary of Samsung electronics) that has voice recognition and can be connected to your smartphone through the ConnectNext app suite, infotainment in the Hexa is ultra-modern and is supported by a sophisticated 10-speaker JBL audio system. In-house, interactive applications as the Tata Smart Manual and the Tata Motors Service Connect have only added to the quality infotainment experience that the Hexa provides.

As if the City wasn’t a brand name by itself already, the all new and advanced DIGIPAD infotainment system by Honda only makes the 2019 Honda City all the more exciting. With features such as satellite-linked 3D navigation, connectivity to the smartphone through MirrorLink support, voice recognition, Bluetooth streaming, digital radio and Wi-Fi connectivity, the infotainment system in the City is top-of-the-class, allowing users to easily access the digital world, including their social networks, in a more intuitive and a less distracting manner.