The Audi RS3 is the first compact sedan from the Audi stable that bears the RS label. As a sportier version of the A3 sedan, and billed as the world’s most powerful series production five-cylinder engine, the five-cylinder engine not only offers great power but is also responsible for the special and unique sound of this car.

In terms of looks, the Audi RS3 is sharp and much sportier than its predecessor, it also boasts of being 33hp more powerful as well as 26 kg lighter. The redesigned bumper includes the RS3 logo at the single frame grille as a proud display of its branding, further enhanced by the Quattro logo directly below on the lower half of the honeycomb grille. Still lower is a wide blade extending across the width of the entire front and side air vents that provides a solid look to the car’s appearance. In terms of dimensions, the Audi RS3 is approximately 21 mm longer and 6 mm wider with a smaller wheelbase of 6 mm compared to the A3 sedan standard. The front wheel arches are flared and wider too. The RS3 gets vertical LED headlamp units that are fitted with daytime running lamps as a standard, as well as a Matrix LED setup which is optional. The sedan rear profile is fitted with prominent diffuser inserts, vertical struts and a fixed spoiler. 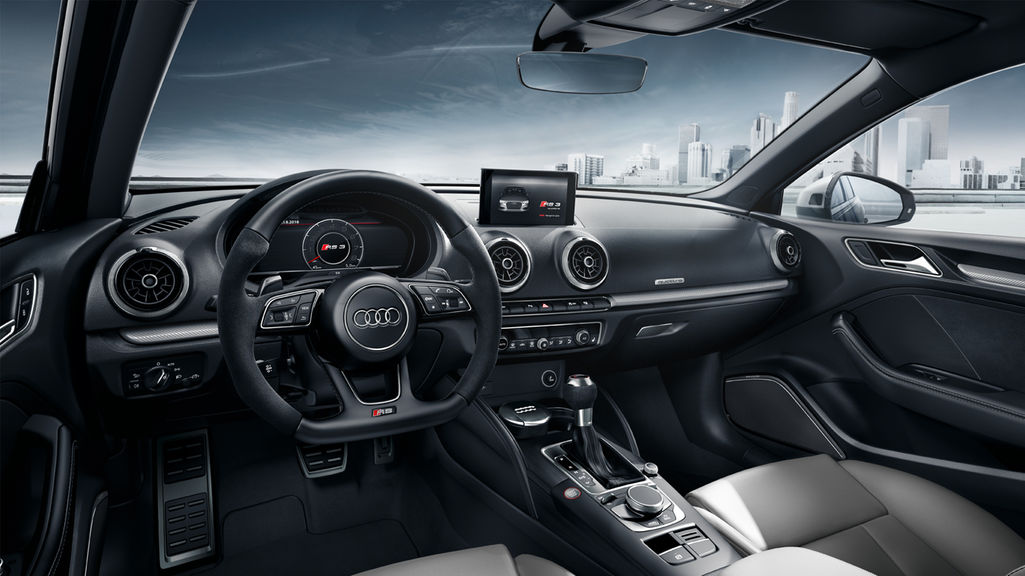 Regarding instruments, the standard Audi Drive Select system allows the driver to choose between three modes, namely Comfort, Auto and Dynamic. Through this system, the properties of steering, gearbox, throttle mapping and exhaust flaps can be customised as per the driver’s preference.

In terms of performance, the Audi RS3 can rocket from 0-100 km/h in 4.1 secs. Under this sedan’s hood is a powerful 2.5 litre TFSI turbocharged petrol engine that is capable of producing 400 hp of peak power and 480 Nm of torque in a range of 1700-5850 rpm. The engine is paired to a seven-speed dual-clutch automatic transmission, which assisted by an all-wheel drive Quattro system, distributes power directly to the four wheels. The Audi valvelift system which is another feature of the RS3 engine helps in variable control of the exhaust valves which supposedly enhances power development at a reduced consumption level. Moreover, there is an optional RS sports suspension plus with adaptive damper control.

Audi USA has priced this car at approximately 55,000 USD for the base model, the price and launch for the Indian market are yet to be announced.